“Half a King” does what so many YA novels strive for but fall short of reaching, it touchs all readers. Joe Abercrombie’s new novel is a bloody wonderful tale of loss, revenage, and coming-of-age. And the story is for everyone! 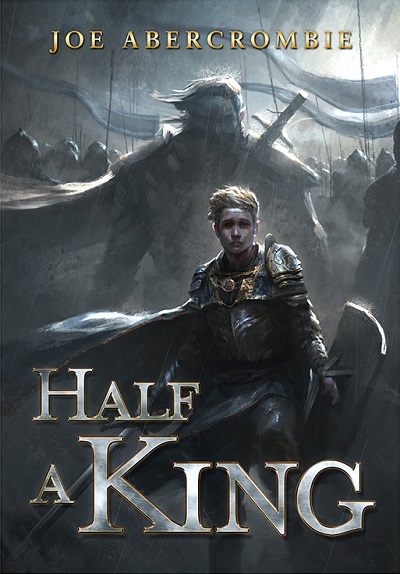 “I swore an oath to avenge the death of my father. I may be half a man, but I swore a whole oath.”

Prince Yarvi has vowed to regain a throne he never wanted. But first he must survive cruelty, chains, and the bitter waters of the Shattered Sea. And he must do it all with only one good hand.

The deceived will become the deceiver.

Born a weakling in the eyes of his father, Yarvi is alone in a world where a strong arm and a cold heart rule. He cannot grip a shield or swing an axe, so he must sharpen his mind to a deadly edge.

The betrayed will become the betrayer.

Gathering a strange fellowship of the outcast and the lost, he finds they can do more to help him become the man he needs to be than any court of nobles could.

But even with loyal friends at his side, Yarvi finds that his path may end as it began—in twists, and traps, and tragedy.

Within a few short chapters, after protagonist Prince Yarvi’s father the king and elder brother die and just before he’s deceived and betrayed by one of his closest his allies and true family, I thought “Half a King” was Abercrombie’s usual fair. A grim-dark fantasy with anti-heroes aplenty and treachery at every turn. Watch out for daggers in the back. There’ll be an incestuous couple weaving a plot. A couple beheadings. Blood in the beer mugs. And a lot of sexual onamonapia.

No. This is a YA fantasy. Yet it’s not. “Half a King” is for all readers. It’s a Bildungsroman for sure. Prince Yarvi is a teenager living in a time most people will picture with raiding vikings, high kings, and shield walls. It’s a tough place. Especially for Yarvi, who’s a cripple and weakling. You see, his hand is deformed. He’s also small. He can’t hold a shield and thus is a piss-poor fighter, no one wants to stand next to him in a shield wall. Instead of being in line for kingship, he’s being groomed as a sort-of minister, a counselor to kings, a role for women. Yarvi is quick as a whip. Smart and crafty. Yet he’s ridiculed by his father’s warriors and scorned by his (those dead and still alive) family.

So when his father and older brother die, he’s forced into the role of king and quickly betrayed, made a slave, and carted off to a galley ship. He quickly finds his wits are better than any sword and shield and that misfits like himself are his greatest allies for getting home, avenging his fallen father and brother, and retaking his kingly title. Yarvi has to out-think his enemies and lay himself lower than he ever thought possible to reclaim his kingdom. Don’t worry, there are plenty of twists. I counted four by the story’s end.

Sounds cool, right? Something from Martin’s Game of Thrones? Yarvi could be Arya Stark’s brother. He’s that plucky and ruthless when need be. He starts off as naive and easily coerced but by the end of the story becomes the man he needs to be in order to survive in his father’s world. This means Yarvi must compromise. He has to let go, of being a child, of being a cripple, of his fears and insecurities. He learns to lead people, use people, and toss them away. Sometime he’s not relatable but I think most readers will empathize with his struggles and understand how Yarvi rises to become not just a man but a king, even if they might not agree with his decisions. I didn’t not see Yarvi’s final scene coming, it punched me in the gut and completely changed the way I thought of the character. Loved that moment!

This is my first foray into Abercrombie’s work and it won’t be the last. He’s a masterful storyteller. The Shattered Seas is a grungy, hard place to toil and eke out a existence. It is also a world filled with adventures for the taking, a dangerous landscape with a variety of people who are deadly and untrustworthy.

The supporting cast surrounding Yarvi is delightful. None are cookie-cutter.

“Half a King” is for readers YA and adult, lovers of rich fantasy with complex characters and intricate ever-twisting plots. The novel is out July 15th 2014, I was lucky enough to get an ARC from Netgallery. Head on over to Joe Abercrombie’s website once you’ve read his latest and have a taste for his craftsmanship (click here).

Oh! One last thing. The cover at the beginning of this post is the work of Jon McCoy for the Subterranean Press edition of “Half a King”. It’s too gorgeous not to post. Check out McCoy’s other fantasy work (click here), there’s some great imagery there.

Three high school teens in the woods on a Friday night… some beers… skaters with a grudge… what could go wrong? Add in a couple of genetically created … END_OF_DOCUMENT_TOKEN_TO_BE_REPLACED

A dark short story about one man’s oversight concerning his death.  Since dying was just not part of his daily routine, the man just went on with his … END_OF_DOCUMENT_TOKEN_TO_BE_REPLACED